UX Design, User Task Stories, User flow, Wireframes, Initial UI
DISCLOSURE: ORI was a client of Twenty Ideas. I was contracted to help fill a gap in their team during the first phase of the project.
TL;DR
A group of scientists from Oregon Research Institute received a grant to develop a wellness app for teenagers struggling with nicotine addiction. I was brought on by Twenty Ideas during the early stages of the project to help solidify the MVP version of the prototype. This meant establishing baseline app requirements, detailing user flows, creating a phase-one prototype, and leading a field research session with a group of teenagers. 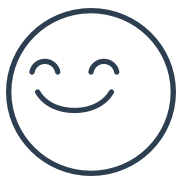 You've probably heard that phrase "there's an app for everything". This at least feels very true. When our phone screens are jammed full of apps we like to use (and many we forgot why they were there to begin with), how do you make a tool that would be reached for by teenagers when they are looking for mindfulness support or relief from addiction? How do you provide tangible benefit or education without boring them or turning them off of the research goal?

During our very first meetings with the clients - a group of research scientist from Oregon Research Institute - we had some thoughtful conversations around these questions. Just because you build it, doesn't mean anyone will come. On top of that we were all acutely aware that we were not the audience for this tool.

My first task with the group was to take their initial flow (shown above, meant to articulate details of the scope) and find out what was needed, and what was not. The project was grant-funded, and so needed to show clear success. The researchers had data to back up the content they were proposing. What we kept coming back to was the technical needs of the onboarding process, and the pace of moving users through the educational modules without losing them.

After working through a series of user flow scenarios (below), and researching different app aesthetics, I put together a focus group at ORI's offices with a group of about 15 high schoolers. We ate pizza and had a casual Q&A session around what apps they used, how much time they spent on them, and talked specifically about features their favorite apps utilized (good and bad).

Finally, we looked at about 10 different existing apps and discussed their visual design. From this conversation we were able to hone in on the UI design and avoided making something that felt inauthentic to the focus group, which was to become our first group of prototype testers. I initiated and early round of UI which was handed off to another designer for completion.
Research & Design
Understanding the audience and removing barriers for entry.

Outcomes
Giving the client better tools for decision-making.
We needed to make sure teens would open the app regularly. The overall outcome of this initial research and validation work was the simplification of the onboarding flow, and creating a new primary metric. The mood tracker was single screen with a slider allowing the user to pick a face icon that best articulated how they were feeling in that moment.

This screen was friendly and provided a simple interaction that would provide immediate feedback . It also didn't require the user to work through the modules if they didn't want to. The assumption to validate during later testing would be whether or not a simpler, early interaction improved the likelihood users would begin to check out the educational modules. 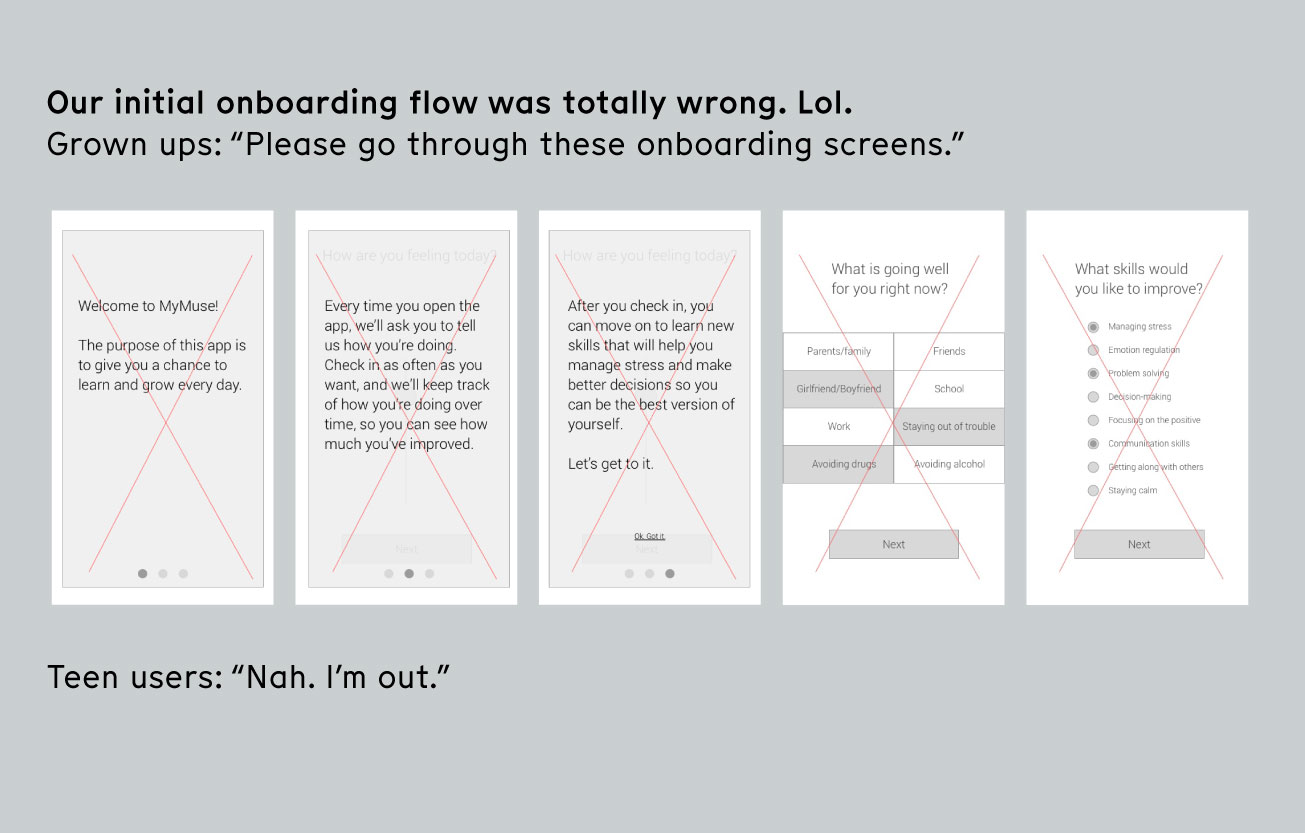 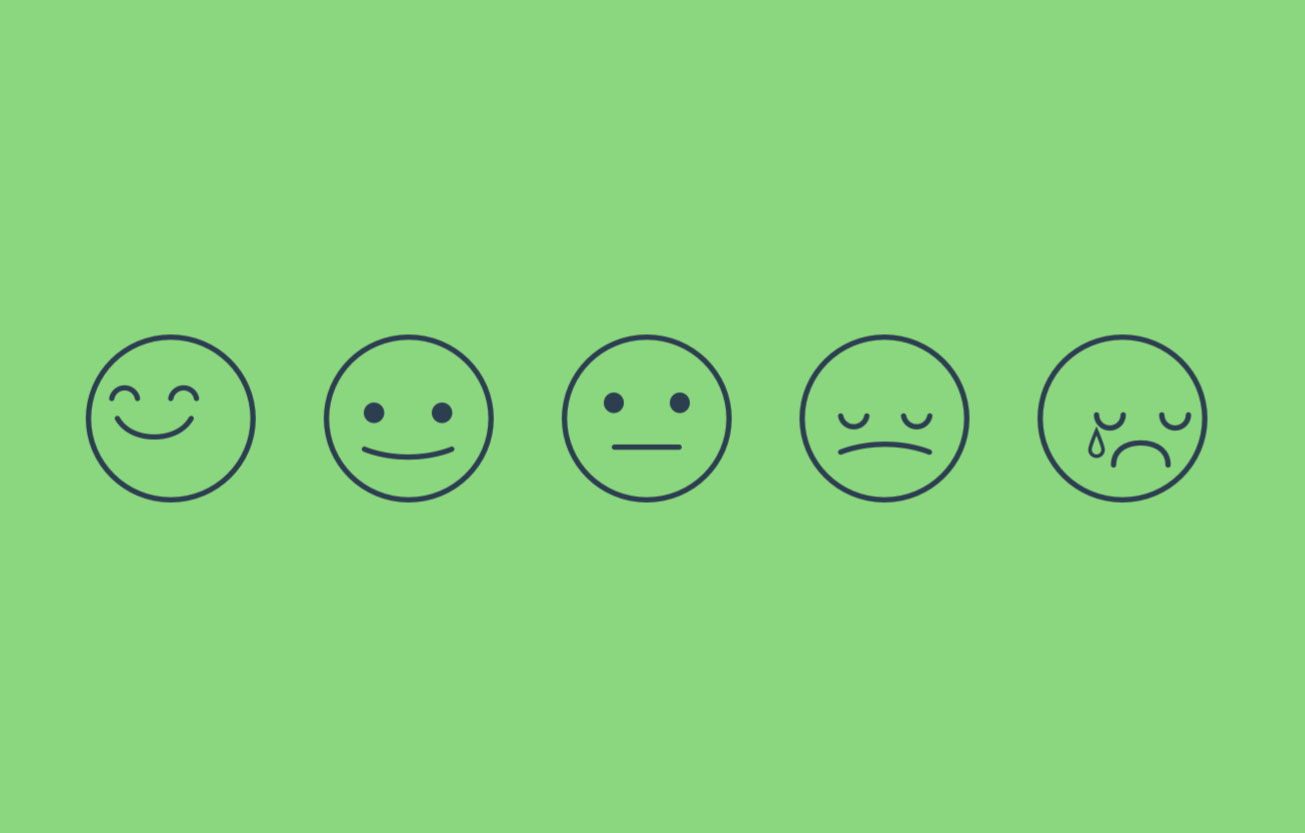 This project was a great example of taking a broad idea, reducing it to core elements, and redefining the outcome. What was originally the most important part (mindfulness education modules) became a secondary metric in favor of getting users to use the app more often.

Since I was brought on to fill a gap for Twenty Ideas, I was able to hand-off my work to the rest of their team as their schedules became open. The app went through several iterations of art direction and naming, and after multiple iterations was finally named Qlarity.

The big take-away for me on this project was the re-affirmation of how important it is to talk to real people, in real life, about their needs and behaviors. Nothing beats first hand information. Also, never trust app design for high-schooler to the over-40s set without checking yourself at the door. The kids are alright.
It's All apart of Learning
UX is all about real people using real tools in real life.

Want to work together?

If you like what you see and want to work together, get in touch!